There’s a lot of talk lately about becoming a one-car couple or even not owning a car at all. It’s all about minimalism, working towards financial freedom and obviously saving as much as you can each month. Is it even possible to share one car as a couple?

It certainly makes sense that if you’re paying a hefty car instalment, you could save a lot by switching to Uber or some other alternative. But what about the long run? Surely once your car is paid off it would be better to keep it?

There’s unfortunately no “one size fits all” kind of calculation but we can look at some of the main financial aspects to consider. On a personal level though we also need to consider family life, how we value our time, convenience and daily routine. And for that there is really no formula; it’s a gut-feeling that we simply need to trust.

Rachel & Nandi live in Cape Town. Rachel bought her car just over a year ago and is paying a steep instalment whereas Nandi’s car is paid off and relatively cheap to maintain. Would it work out for them if they sold one car?

The initial conversation should really be around the plausibility of it all. Do their schedules and travel requirements allow for any alternatives? Morning routines can be hectic if you add gym, schools drop-offs or a long commute, and the after-work schedule could be equally taxing. Nandi could make it work if she bought a scooter whereas Rachel could use a combination of public transport and e-hailing services.

It would be a good idea to try out some alternatives before jumping into any decision and it may even be possible to negotiate a few work-at-home days or changes in the daily routine. Everything comes at a cost and even though the “inconvenience factor” may not be quantifiable, it shouldn’t be ignored.

See my own experience in trying out alternatives in my post on whether I should sell my car.

The easiest place to start is to simply compare current monthly costs to an alternate set of monthly costs. Think about the instalment payment, insurance, fuel, Tracker or AA subscriptions, parking and car guards. Things like maintenance or tyres aren’t a monthly expense but try to find your average spending per year and divide that into a monthly figure.

Looking at alternatives the best way to estimate the monthly cost is to actually use the alternative. There may be a few options but if you can estimate a monthly figure it would allow you to compare costs. 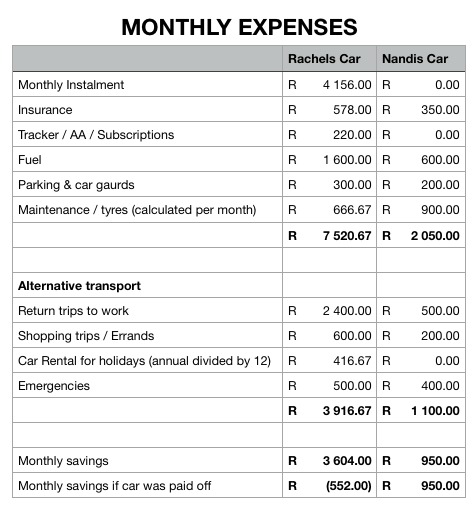 Rachels costs are much higher than Nandi’s and as her office is a fair distance away, the Uber costs are quite steep too. She’d definitely save money compared to the instalment she’s paying, but if her car was paid off, her alternative would actually be more expensive.

Calculating future costs to share one car as a couple

The monthly cost is one aspect of the calculation. How much will you make after selling your car and settling the debt? And what about purchasing a cheaper car or possibly even a scooter for town riding?

You can work out how much cash you’ll have after selling your car and settling the debt. With this you can see how many months of alternative transport you would be covered for. 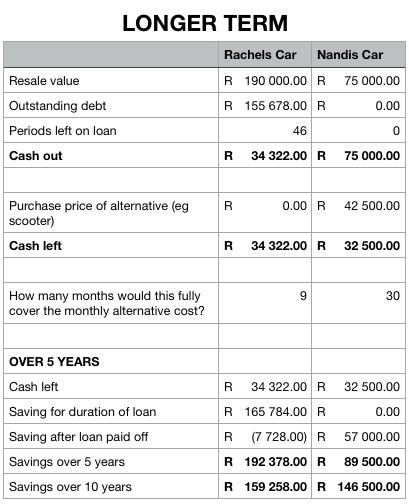 In this example, Nandi would get a lot more cash out if she sold her car, even though it’s much older than Rachels. That’s simply because it’s already pid off. However, after buying a scooter she would be left with a similar amount to Rachel.

As Rachels alternative is to use Uber, her monthly costs will still be quite high and she would be able to cover 9 months worth of transport if she went the route of selling. Nandi’s scooter is cheap to run and she could cover almost 3 years of transport. (No inflation adjustments have been made)

Over the next 5 years though you’ll see that the overall savings that Rachel makes is significantly higher than the savings that Nandi makes. That money could be invested and could grow to a nice lumpsum. But, it’s important to note that Rachel’s alternative transport becomes more expensive at the point at which her car would have been paid off. So going forward it would be more expensive to use the alternative but the initial savings would see her through a number of years.

Not taken into account is that we’re easily tempted to upgrade our cars every few years and often take on higher instalments. Breaking that cycle and changing your mindset can add to your long-term financial wellbeing.

One can delve much deeper into the calculations and create a month-by-month table showing growth on your investment (should you invest the money after selling a car) along with the withdrawal to cover your transport expenses. Add an inflation-related increase and predict how long the money would last.

The calculations are prone to errors though as circumstances may change and we have no way to predict what the future holds for us. Things could change quickly but you can try to cater for the various scenarios that you can think of now.

In this example it seems that it’s not a bad idea for either of Rachel or Nandi to sell their car as they would both be able to save money. Rachel factored in emergencies as well as car rental for a holiday trip, but only they can decide whether the inconvenience to share one car as a couple is worth the savings.

It may work out well on paper but the practicalities could prove tricky and unmanageable. On the other hand, they may find that life becomes easier. Not having a car means that you don’t get asked to run errands for others or try to fit too much into your day. Not fighting through traffic may lead to a calmer morning and zooming through the city on a scooter could be just what you need.

Start the conversation, do some calculations and see where it takes you.

What else would you take into consideration? Please share your own stories in the comments. Do you and your partner share one car as a couple?

How to make a budget

How to get out of debt